Für die Neueinrichtung des ‚Open Space‘-Raums im Literaturmuseum der Moderne haben wir Schriftsteller:innen aus Afrika im Juni 2020 um Antworten auf diese Fragen gebeten: What does “Africa” mean to me? What is my favourite (literary) quotation regarding “Africa”? Why is this quotation important to me?  In my opinion, what function(s) does literature have? How has the 2020 pandemic affected me and the way that we interact with society and the world around us? 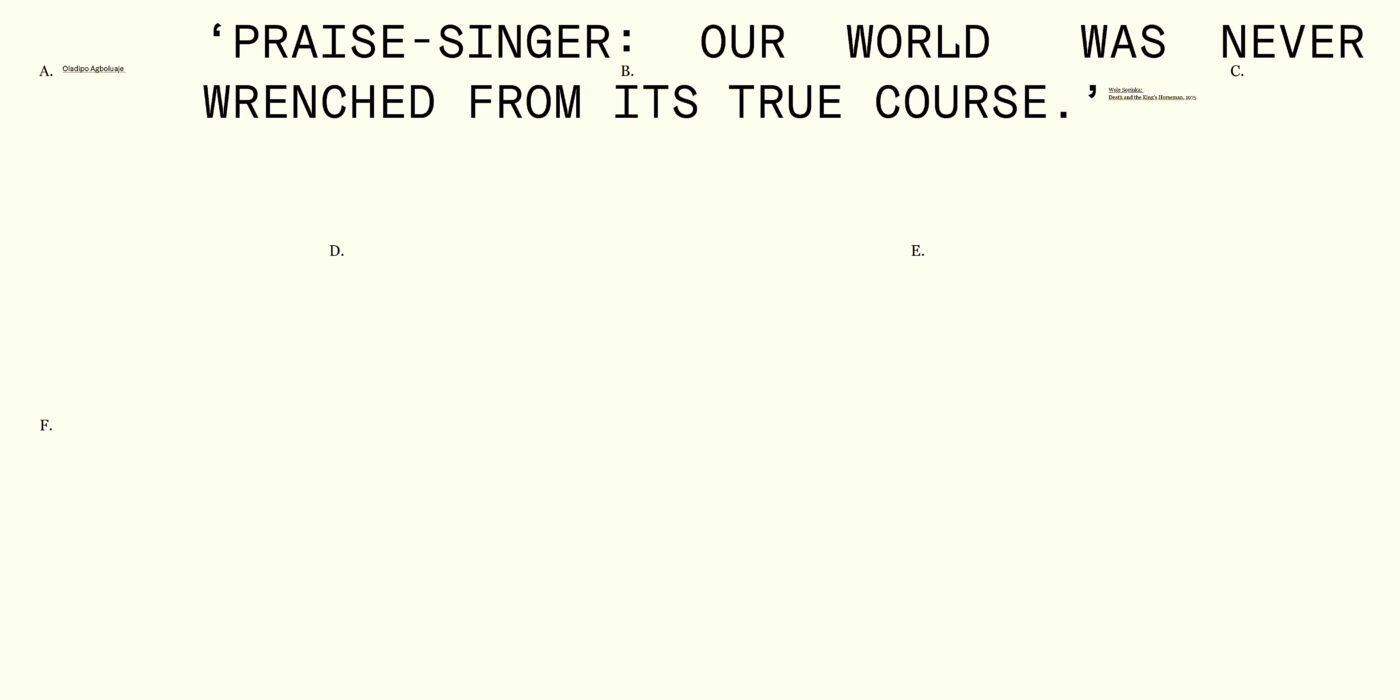 „In truth, I don’t have a favourite anything; a novel, play, or movie. So this question is hard for me. I used to be one of those youngsters who wrote down their favourite quotes in an exercise book. Fortunately, the habit never left me.

Since plays occupy most of my reading time I’ve picked this quote from Wole Soyinka’s ‚Death and the King’s Horseman‘.

Why is this sentence quotation important to me? This text is set in the Oyo Kingdom, the seat of the old Yoruba Empire. It is now under the control of the British Empire. The story revolves around the King’s Horseman, Elesin Oba, who is preparing to commit ritual suicide to follow the late King, the Alaafin, to join his ancestors. But Elesin Oba procrastinates. The British district officer stops the ritual suicide from going ahead and detains Elesin Oba in a cell. Elesin Oba’s son Olunde returns from London expecting to bury his father. When he sees Elesin Oba alive, Olunde commits suicide in his place. On seeing his son’s body, Elesin Oba commits suicide.

Soyinka deals with several themes in the play, but the quote resonates with me because it points to the resilience of the Yoruba race, and by extension of Africans and Africans in Diaspora. Praise-Singer’s lines preceding the quote give the line context: ‘the white slavers came and went, they took away the heart of our race, they bore away the mind and muscle of our race. The city fell and was rebuilt; the city fell and our people trudged through mountain and forest to find a new home’.

Here Soyinka refers not only to European colonization but also to the Fulani Uthman Dan Fodio whose Jihad in northern Nigeria put pressure on the Oyo Kingdom, forcing its people to flee its original capital to its present location.

The quotation recalls in me my return to Nigeria from London, that even though I’d never previously set foot in Nigeria, there was something at my core that was Yoruba, and that despite my having considered myself to be British for the first nine years of my life, being Yoruba, being Nigerian, being African was always a part of me.“ 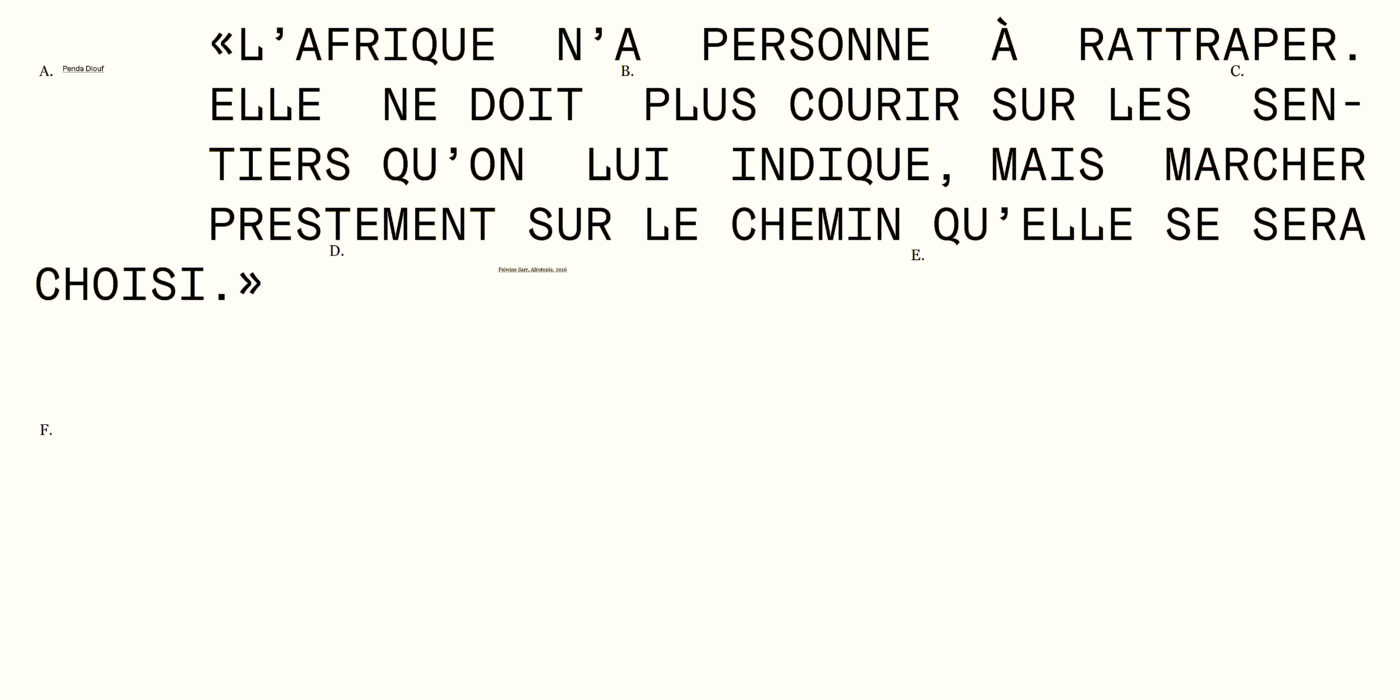 „I really like this quotation of Felwine Sarr in ‚Afrotopia‘. In English: ‘Africa has no one to catch up with. She must no longer run on the paths that she is told, but walk quickly on the path she has chosen.‘ For me, it is a question of reaffirming the autonomy of the African continent and its potential, of the beaten track.“ 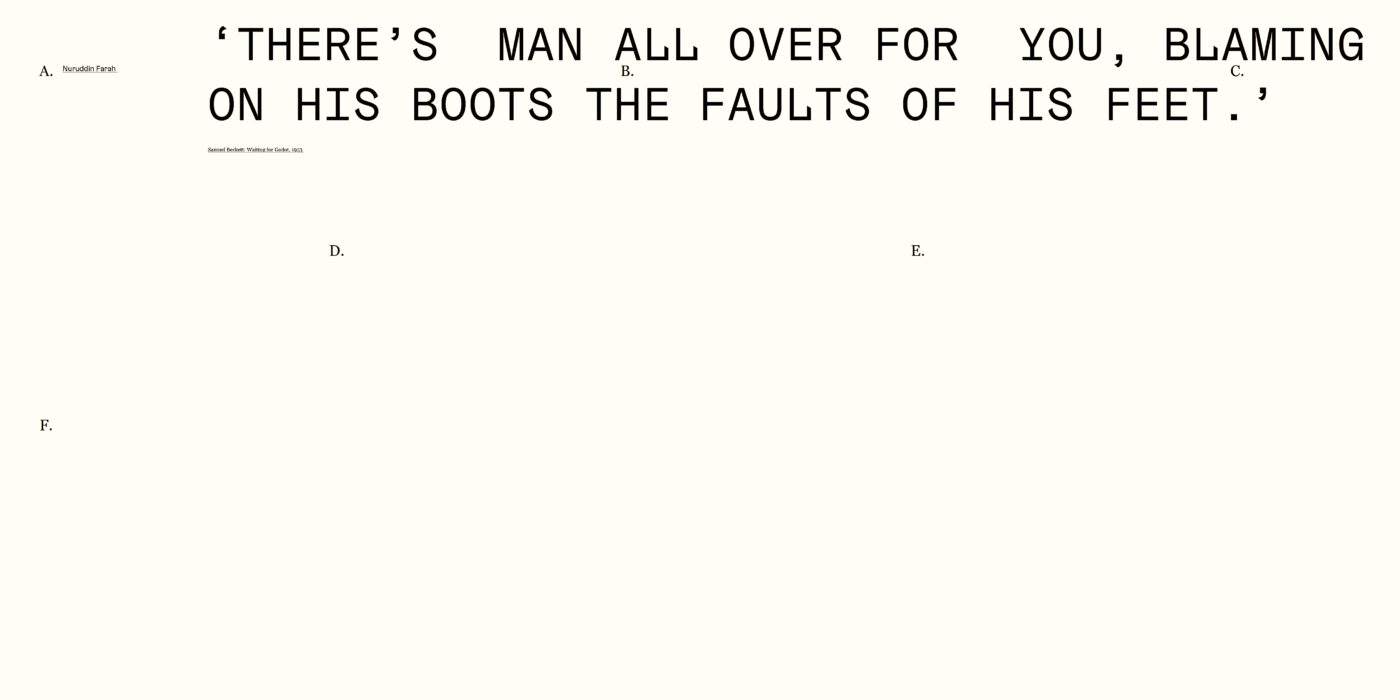 „It is my favourite quotation, because one can apply it to many situations, especially political situations, on most occasions.“ 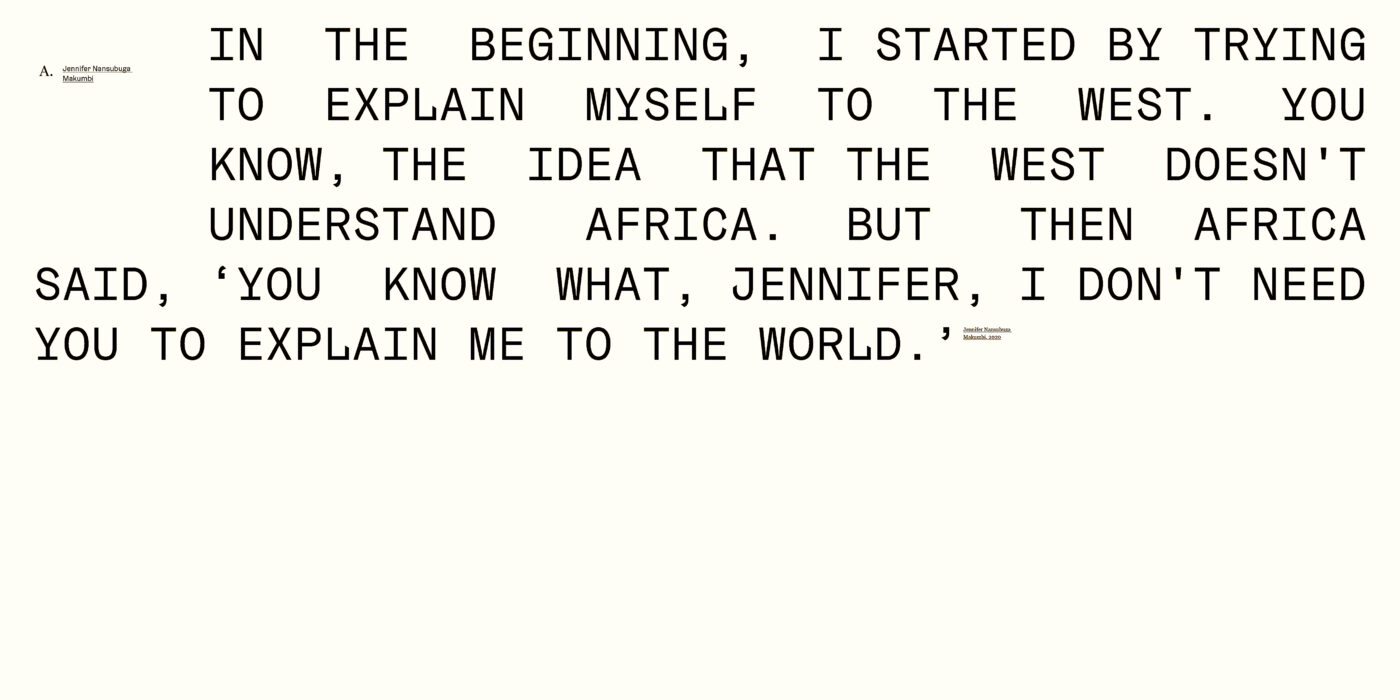 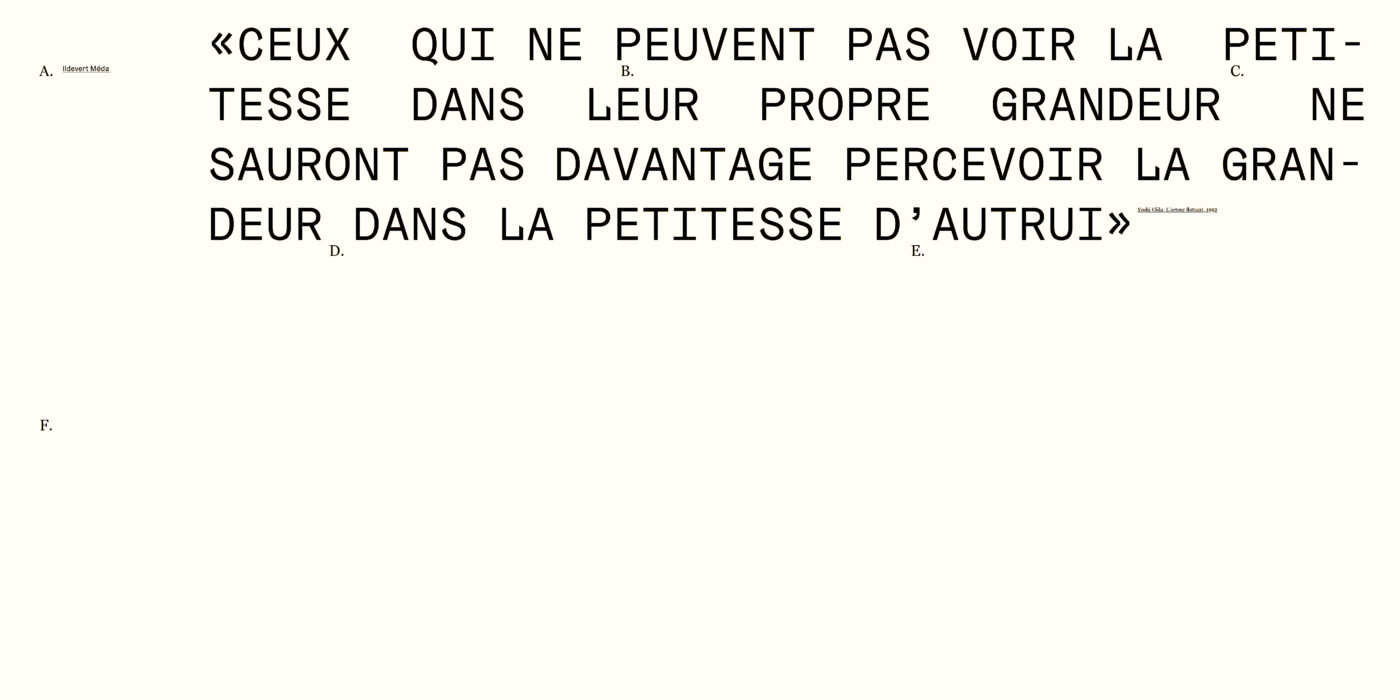 „My favourite literary quotation is from Yoshi Oïda, an actor working with Peter Brook. This quotation has a deep link with many old African values taught to the youth during initiations. It reminds me that great human values meet somewhere, no matter where you live and where you come from.

It is also important to me because it guides my link to my fellow human beings and my fellow collaborators, it helps me learn a lot from others.“ 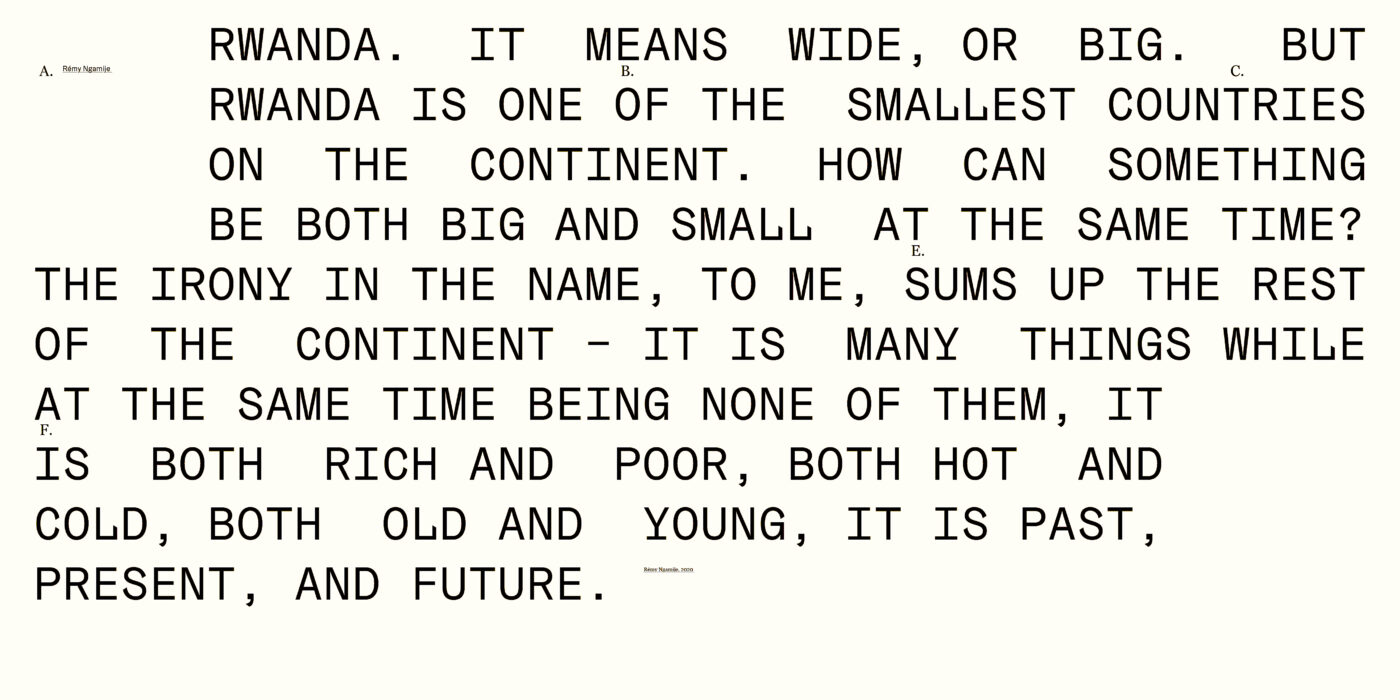 Rémy Ngamije about the name "Rwanda"

How can something be both big and small at the same time?

The irony in the name, to me, sums up the rest of the continent – it is many things while at the same time being none of them, it is both rich and poor, both hot and cold, both old and young, it is past, present, and future. These wonderful contradictions can be found co-existing and conflicting with each other – I think there is a strange beauty in that.“ 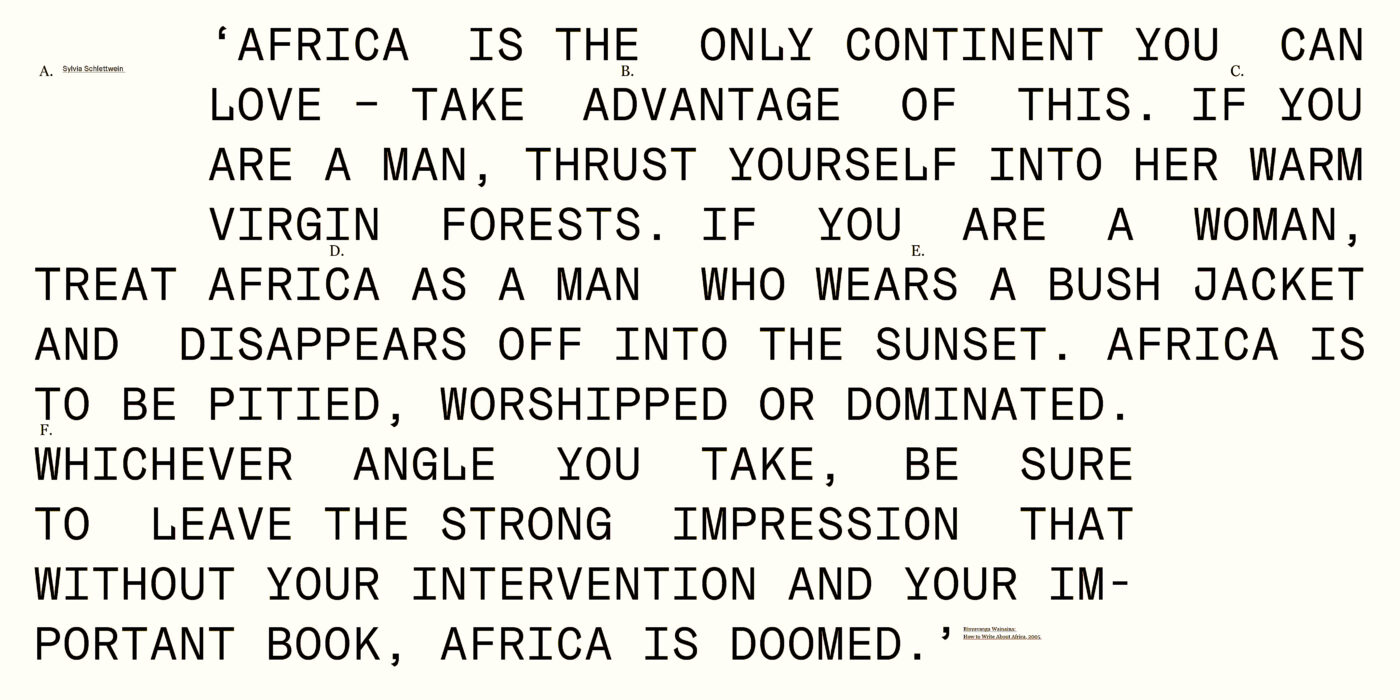 Sylvia Schlettwein / Binyavanga Wainaina: "How to Write About Africa" (2005)

„If I could, I would have quoted the whole essay. To me it remains the most brilliant piece on why it sometimes frankly sucks to write about Africa, but why we should laugh and pursue: When we write about/from our African ‘normal’, we are criticized for being inaccessible because the poor reader who does not know Africa will be lost, but when we write about ‘normal’ (aka universal) issues, our writing is not ‘African’ enough.

We need to get over these stereotyped expectations and turn them around and write how and what we like. We do not need to save Africa. We need to write about it and tell its stories – individually and authentically.“ 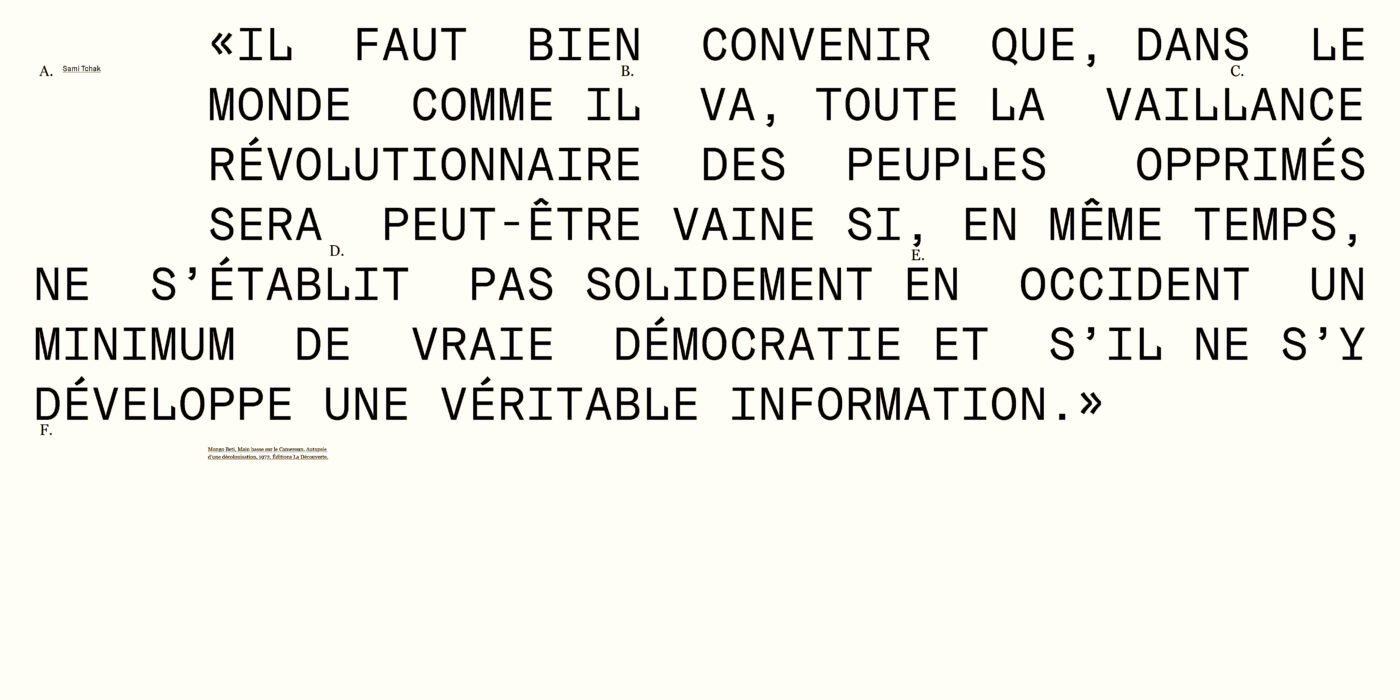